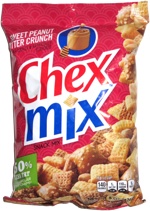 As I sifted through the bag to get a sample that included all four, I found that the vast majority of the bag was actually just the two kinds of Chex. They had a bit of sugary, peanut buttery stuff on the surfaces and tasted good. The roasted peanut pieces, which were generally just half of a nut each, tasted good, but the nuggets were even tastier, with lots of salt on their surfaces and some creamy peanut butter inside. But there weren't a whole lot of either of those.

A good mix, but it would have been nice if the Chex hadn't so dominated it.

Smell test: Smells like a jar of peanut butter. Sweet too.

From the package: “It's easy to call this blend 'peanut buttery and sweet.' But really it's more like a peanut butter adventure on the magic carpet ride of sweetness. It's a handful of deliciousness and a must-have for snack time everywhere.”

This snack was discovered by Jeremy at Market Basket. Review published May 2016.