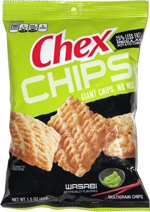 Taste test: Much like the Cheddar Jalapeño flavor of Chex Chips, this snack seemed to be more themed on Chex than based on Chex. The "chips" looked like oversized Chex, but they were made from different materials, had a different texture, were multigrain rather than single-grain, and generally were really nothing like Chex.

We crunched in to find a cereal-like feel, but like a puffy cereal, not like Chex. The texture was crisp and fairly light, and there was a mild zing of wasabi mixed in with some other spices. The strength of the wasabi kick varied from one piece to the next, but generally these were not super-strong. There are quite a few wasabi and horseradish snacks we've had that were much stronger, but we've also had some weaker ones too. Our snackers enjoyed these, praising the taste and texture.

Smell test: Mildly zesty spices, but only a bit of it seemed to be wasabi.

From the package: “Giant chips. No mix.” ... “You're about to experience a multigrain chip like no other. A bigger, puffer version of the Chex squares. You'll love that unique pattern in a light and crunchy chip.”

This snack was discovered . Review published .