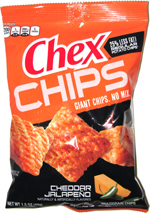 Taste test: This latest variation of Chex-in-a-snack-bag did away with the Mix part and made the Chex quite a bit bigger than what we've come to know as Chex from the cereal. Each one was about an inch square and shaped like a pillow, with a hollow interior and a pattern of small holes running diagonally across the surface.

We crunched in to find a crisp, fairly light feel with a pretty good jalapeño taste, more jalapeño than cheddar. They really didn't resemble Chex at all in texture or taste — they were a much closer match to the discontinued Ruffles 3D's. As for being "Chips" they were more like puffs than chips, or like cereal (but not like Chex). Real Chex tend to identify themselves by one grain, with wheat, corn, rice, etc., but these did not. We checked the ingredients and found that they were made from wheat, corn, rice, barley and oats.

From the package: “Giant chips. No mix.” ... “You're about to experience a multigrain chip like no other. A bigger, puffer version of the Chex squares. You'll love that unique pattern in a light and crunchy chip.”