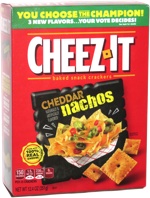 Taste test: This Cheez-Its flavor was pitted up against fellow limited editions Pizza and Cheeseburger in a contest to choose a permanent flavor. The crackers had the usual orange Cheez-Its orange color on their surfaces, plus a generous smattering of very dark seasoning powder, with the amount of dark stuff varying a lot from one piece to the next.

The box depicted a plate of nachos loaded with the usual nachos toppings, so that's what I was expecting in terms of flavor. I crunched in to find a tasty mix of cheddar and spices, but it was mostly like a strong hint of taco powder with nacho cheese, but not really all that much like a plate of loaded nachos. Still, it was a very nice taste, and a different one from anything we've found on Cheez-Its before. The amount of kick in any given piece seemed to correspond to the amount of dark seasoning.

Smell test: Not really that much like nachos, but some kick of taco powder.

From the package: “You choose the champion! 3 new flavors ... your vote decides!” ... “Inspired by tailgate favorites! Would you choose cheeseburger? Do you need nacho? Or would you pick pizza?” 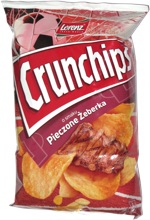