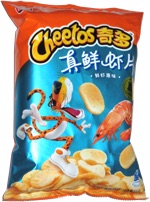 Taste test: These cassava-based chips from China contained actual shrimp, though we couldn't see it, with the pieces formed into off-white (not really yellowish as pictured), styrofoam-looking pieces that were generally flat or slightly scoop-shaped. Despite their Cheetos name, they didn't seem to contain any cheese among the long list of Ingredients, but the dancing Chester Cheetah pictured on the bag didn't seem to mind. (We base this on pointing Google Translate at the Chinese, as the import label appeared to be quite wrong, listing Potatoes first on a very short Ingredients list.)

We crunched in to find a nice light, very crisp feel with a flavor that started out sweet and slightly tangy, then transitioned into a shrimp flavor after that. It wasn't shrimpy or fishy in a bad way at all — really tasty!

Smell test: Mild, sweet smell with some spices, but not fishy.