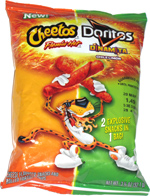 Taste test: This was a groundbreaking snack, as it was the first attempt we've seen to package Cheetos and Doritos together exclusively in the same bag. (They've been together before, along with other snacks, in bags of Munchies.)

It was also, in a way, a YouTube sensation brought to life. The extremely popular "Hot Cheetos & Takis" rap (8 million+ views, see video below this review) described a popular combination of Frito-Lay's Flamin' Hot Cheetos with Barcel's Takis, which come in various flavors. Perhaps in reaction to this, Frito-Lay in 2012 introduced a Takis knockoff, Doritos Dinamita (available in Chile Limon as used here, as well as Nacho Picoso). This combo bag allowed snackers to eat largely the same thing without having to leave the company, so it was the next logical step that we never expected — if "Hot Cheetos and Doritos Dinamita" didn't take off as a combination (or video sensation) when packaged separately, why not sell them together?

We opened the bag to find that although it was possible to distinguish between the two kinds, they really didn't look all that different. The seasoning color was nearly identical, with a intense shade of red; the few spots on any given piece that lacked seasoning seemed to be the same shade of yellow. Even the shapes didn't stand out in the bag, because although the two kinds were different (Cheetos being irregular, random cheese curls and Doritos Dinamita being mostly uniform tubular tortillas) the overall size and shape of your average Dinamita could almost pass for a particularly straight Cheeto on first glance.

We crunched in to find a fairly strong crunch and good kick of heat from the Hot Cheetos. The Doritos had a stronger but less crisp crunch and a similar flavor. It didn't seem like the Cheetos, which were supposed to be Flamin' Hot but with no mention of lime, had any less lime than the Doritos. Alternating between the two kinds brought heat on top of heat, which was probably the point here — the mixture of both kinds was quite hot. It also left lots of red seasoning on the fingers and mouth. The variety of textures and strong level of heat made this a very enjoyable snack for those who crave heat. And it was easier to eat these two kinds out of one bag than having to mix together two different bags. But as you can see in the video, "Hot Cheetos and Takis" has a better ring to it.

From the package: “2 explosive snacks in 1 bag!” ... “The combination of crunchy textures in explosive flavors will detonate your senses!” ... “Also available individually: Nacho Picoso and Fiery Habanero”

This snack was discovered by Jeremy at Tedeschi. Review published May 2014.