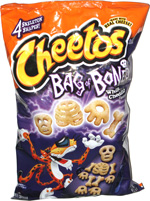 Taste test: On the heels of Cheetos Mix-Ups, which combined four different shapes (and flavors) of Cheetos in one bag, Chester Cheetah is back with four new shapes, this time shaped like skeletal parts as part of a Halloween theme. The shapes were a skull, rib cage, bone (apparently a generic one) and hand/foot (again, multipurpose/generic). The front of the bag showed how you could build (most of) a body using just these four pieces. Unlike the Mix-Ups, which were each a different flavor, all four of these had the same light yellow color of puffs, covered with white cheddar powder. The white-on-yellow look was kind of ghostly!

We crunched in to find a light feel, soft crunch and excellent crispness, with tons of great white cheddar to complement the corn-based puffs. Even though they're for Halloween, we're going to cheer these puffs, rather than boo them, because we liked them!

From the package: “Build your own skeleton with 4 bone shapes” ... “Bring virtual mischief to your neighborhood at cheetoshalloween.com”