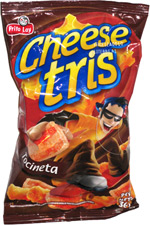 The bacon pieces were strip-shaped and had bacon-like stripes, but had none of the thinness, crispness or wigglyness of real bacon (for that, get some Smiths Bacon Flavour Fries) — yet they tasted quite good, with lots of real bacon flavor. The cheese curls were sparsely covered in a very orange cheese, so you could see lots of yellow from the underlying curl, along with the bright orange powder. The cheese curls tasted sort of bacony too, along with some cheese taste (though not a lot) so this was a very tasty combination.