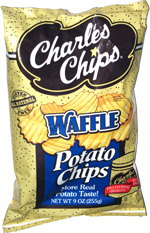 Taste test: These wide-rippled potato chips had a pale yellow to light yellow color, with lots of skin around the edges of some chips. The bag was filled nearly to the top with lots of unbroken chips, many of them large or even huge, which was quite nice.

We crunched in to find a very nice crispness and good, somewhat soft crunch. The potato tasted fresh but the flavor was kind of weak, as there was a minimal level of salt to help bring it out. Eating several chips in a row helped to build up the level of potato flavor, but first impressions count too, and the first bite of the first chip was particularly weak. Most of our snackers were still impressed, but some did complain about the lack of flavor.

From the package: “Remember when deliverymen would bring legendary Charles Chips® to your home or office? Since 1942, Charles Chips® has been delivering smiles. Years ago, when the distinctive gold and brown tin showed up at your front door there was no mistake ... Charles Chips® had arrived. For over 70 years, people have been enjoying the taste of Charles Chips® products.” ... “Original Recipe - 100% Cottonseed Oil”

This snack was discovered by Jeremy at Gristedes at 103rd & Broadway. Review published March 2014.