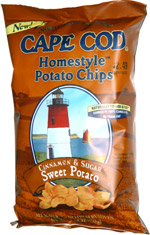 The taste of the chips was good, and the cinnamon sugar was pretty good too, but most sweet potato chips can easily hold their own on taste without the extra cinnamon sugar. These probably could have as well. Most of our tasters liked these, but there were a few who thought the taste was awful.

From the package: “Our new Cinnamon & Sugar Homestyle Sweet Potato Chips are a treat that is just too good to resist. The versatile sweet potato is the ideal food for the health conscious chip lover. Sweet potatoes are a rich source of Vitamin A and are a good source of distary fiber, Vitamin E, Vitamin C and Iron.”

This snack was discovered by Jeremy at Christmas Tree Shops. Review published January 2008.