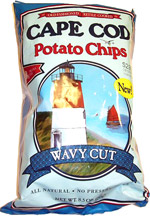 Taste test: I was very skeptical about these chips, as wavy cut chips in the past have been disappointing, a poor replacement for chips with narrower ripples.

But when I saw that Cape Cod was doing a wavy cut chip, my hopes got up. A kettle-cooked wavy chip? Woo-hoo! I was not disappointed. At first glance, these looked really greasy, as you could almost see right through the chips. Fortunately, they were not overly greasy or oily. The chips were extremely crunchy, which was a great thing. The taste was the same as the regular Cape Cod chips, with the added bonus of having wavy ridges. I have a feeling these would be wonderful with a dip. I hope Cape Cod keeps making this variety — they have a definite winner here!

Smell test: A really cool smell — the bag smelled like the fried dough stand at a state fair or carnival.

From the package: “The Atlantic Ocean around Cape Cod is known for its picturesque summers filled with long days of swimming and boating and treacherous winters where awe-inspiring storms are more likely to be viewed from a safe distance. But one thing stays constant throughout ... the waves. And since we at Cape Cod Potato Chips are surrounded by the ocean, we thought that it was only right to create a wavy chip.”

This snack was discovered by Keith at Stop & Shop. Review published September 2006.