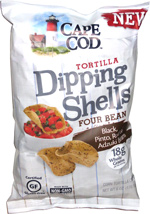 Taste test: These tortilla chips had somewhat irregular dippable shapes, much like the Ancient Grains version, but in this case the color of the chips was just light beige and not yellow at all, with lots of black spots.

We crunched in to find a very mild flavor, with minimal salt and not a lot of corn taste. There did seem to be a bit of a bean taste among the corn, but it was quite mild. The chips were fairly thick and had a good strength for dipping, so it worked well for scooping up some fairly watery salsa, as well as some thick hummus.

From the package: “It's got Flavor. It's got Crunch. It's got Dippability. It's everything you expect from Cape Cod™, but now in a tortilla chip. The Four Bean Dipping Shells Power all of the goodness of Bean Blacks, Red Beans, Adzuki Beans and Pinto Beans into a full-of-flavor, crunchy chip.”

This snack was discovered by Jeremy at Market Basket. Review published June 2015.