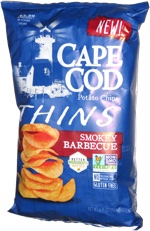 Taste test: These potato chips had a nice light orange low, with some sparse bits of darkish seasoning on the surfaces, plus some bubbles embedded inside and occasional bits of skin on the edges. I crunched in to find that they lacked the crunchy, kettle-cooked feel of most Cape Cod chips. They were still nicely crisp (indeed, even crisper) but they had a softer crunch.

As for the "Thins" name, they actually didn't stand out as being particularly thin, or even any thinner than most Cape Cod chips, but they definitely had a different texture. Essentially, they were much more like ordinary potato chips than what we generally know as Cape Cod chips. But as ordinary potato chips go, they were quite good. The Smokey Barbecue flavor was just as described, very nice.

From the package: “A premium thin chip experience made with Non-GMO ingredients and no preservatives or artificial flavors!” ... “Why are Thins so great???? It starts with the potato. Fresh Potatoes are the best potatoes. Collected at the peak of freshness, Jeff Parker's Family farm harvest potatoes, loads them onto a truck and delivers them to the Cape Cod Factory. No time is wasted because we know that starting with the best potatoes ensures that we can deliver a deliciously flavorful, perfectly crunchy, thin chip.”

This snack was discovered by Jeremy at Market Basket. Review published March 2017.