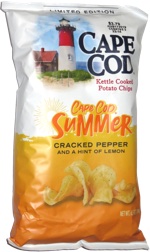 Taste test: These potato chips were generally quite small and had wiggly shapes with a light yellow color plus a smattering of fine black seasoning, plus lots of dark skin around the edges.

We crunched in to find a mild crunch and a taste that was slightly citrusy, though not specifically lemony as promised, with far less black pepper flavor than we anticipated based on the amount powder on the surfaces. The black pepper kicked in slightly in the aftertaste, providing a balance to the citrus, for a very nice flavor. But if you want to taste lots of black pepper, we've reviewed many kind of potato chips that can give you that, so buy one of those (or get these and bring your pepper grinder).

From the package: “Limited Edition” ... “Pairs with Samuel Adams New England IPA” ... “We crafted these limited edition Cape Cod® chips in partnership with the Samuel Adams Brewery, using their hazy, juicy new England IPA as our inspiration. The simple elegance of the cracked pepper and lemon flavor compliments the citrus fruit notes of new England IPA, resulting in a delicious chip-and-beer pairing that captures the taste of summer.” ... “Samuel Adams® is a registered trademark of Boston Beer Corporation. Trademark is used with permission.”