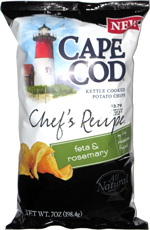 Taste test: These potato chips were wiggly and pale yellow in color, with some large green specks distributed evenly over the chips.

I crunched in to find that there was a fairly soft crunch for a kettle-cooked chip, and also that they were quite loaded with flavor. Cape Cod didn't skimp on the feta and rosemary, and the combination was tasty and worked well with the crisp potato chips. Our snackers were impressed, and many people returned to the bag for multiple handfuls.

From the package: “by Chef Weldon Fizell” ... “Chef Weldon has taken his signature Crostini appetizer and created what could be a signature chip. Taste the tangy smooth feta, the unmistakable earthy rosemary, and a little garlic. It's a combination that would bring any base ingredient to life, and on our hearty and robust kettle-cooked Cape Cod® potato chips, it is nothing short of spectacular.” ... “Chef Weldon Fizell is proprietor and executive chef of the acclaimed Regatta Restaurant in Cotuit, MA.”