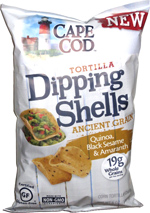 Taste test: Cape Cod's version of the dipping-optimized tortilla chip had simpler shapes than the many-sided Tostitos Scoops, with the round tortilla folded upward on four sides, at most. It's "at most" because the shapes varied from chip to chip, with some only having two or three of those four positions bent that way.

The chips had a pale yellow/beige color, with a fair number of large black spots on each chip, which were presumably the black sesame seeds. Even among the ones without all four sides folded, they worked pretty well for dipping, and the fully folded ones worked best for holding a maximum amount of salsa.

I also tried some plain chips to gauge the flavor without my intense salsa, and it was very nice, with a low level of salt that brought out a nice flavor from the corn and various grains and seeds.

Smell test: Much sweeter than your typical tortilla chips.

From the package: “It's got Flavor. It's got Crunch. It's got Dippability. It's everything you expect from Cape Cod™, but now in a tortilla chip. What makes Ancient Grain Dipping Shells is the special blend of flavorful grains like Sesame, Amaranth, and Quinoa.”