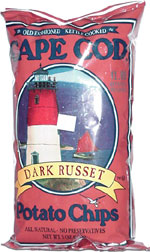 There's lots and lots of potato taste, a good helping of salt, and a good, light crunch. It's hard to stop eating them. Cape Cod makes some of the best chips out there.

From the package: “Thank you for buying our unique potato chips made with real Russet potatoes. The chips inside this bag cook darker than other potato chips, but don't worry — they're not burnt. Russet potatoes unlike their round white cousins contain higher amounts of sugar and when cooked carefully will produce a darker, more robust chip that maintains the integrity of the potato. The mystique of the Russet all began in 1872 when Luther Burbank happened upon an unusual bud on a potato plant at his New England farm. For days he watched the bud grow carefully until one day it disappeared. Luther, an experienced botanist, knew that this bud was special, so he searched until he found the bud on the ground. He opened the fruit to find 23 seeds of which he noticed two seemed particularly superior. These two seeds produced the very first Russet potatoes and earned Luther a place in history. Over the years Luther developed over one half million seeding varieties, but ironically the chance discovery of the Russet was his greatest accomplishment.”