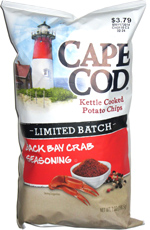 We crunched in to find kind of a hard crunch and a tasty mix of crab spice seasoning and potato. As with the other "limited batch" flavor that Cape Cod released alongside this one, Asiago Cheese & Italian Herbs, the texture wasn't as good as we've come to expect from Cape Cod. It was crunchy but not brittle, with just a bit of a hard edge that brought it away from the ideal kettle chips texture. It was also not as strong of a taste as some of the other Old Bay chips, but it was still tasty. There was also a slightly hot aftertaste.

From the package: “We took your favorite crab seasoning and gave it Cape Cod crunch. We start with select potatoes, sliced them thick, and kettle cook them in small batches to a golden amber hue. Then we take an all-star list of spices including paprika, onion and salt, as well as a dash of sugar free touch of sweetness.”