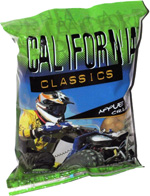 Taste test: These small, crunchy snacks were shaped like puffed-up plus sign (+) and had a lot of sugary seasoning on them.

When I crunched in, there was a decent apple and cinnamon-like flavor from the seasoning, but it was tempered by the fact that the underlying puffs didn't have much taste to them. They tasted like bland rice chips, and a check of the ingredients revealed that the first ingredient was Rice Meal. They didn't taste actively bad, but the taste was just very bland, so I didn't particularly enjoy eating them. I did notice a second kick of apple and cinnamon sugar in the aftertaste, which I actually relatively enjoyed, as the bland taste of the rice puff had subsided by then. But overall, still not very good.

Smell test: Not much, but kind of remotely like apple pie.

From the package: “You've selected California Classics™ Apple Pie Crunch. We put the great taste of apples and cinnamon in one tasty treat. It's like having dessert for a snack ... without the guilt. They're great anytime you want to eat right but stay light.”

This snack was contributed to Taquitos.net by the manufacturer. Review published October 2010.