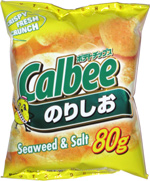 Taste test: These potato chips had lots of green specks on them, and it took just one bite to taste that they were indeed loaded with some sort of seaweed-like flavor.

The initial flavor was quite strong, and it was quite divisive among our tasters, as about half liked it, while most of the others were quite turned off by it. After the initial hit of seaweed, the taste was actually quite different, as the salt and potato were quite a contrast. One taster thought the flavor was like molasses. None of our snackers were in much of a rush to eat lots of these.

From the package: “Crispy fresh crunch”