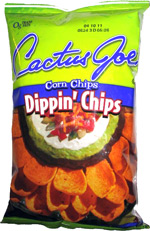 Taste test: These corn chips were fairly large with generally sort of a scoop shape, as the various pieces seemed to be cut the same way but curled up in various ways.

When I crunched in, it felt like the chips were thicker than Fritos, and the taste seemed different too, as they had much less salt and seemed less oily. So the flavor was similar to Fritos, but definitely less intense. If you're going to dip them anyway, as they've indicated on the bag you should, and as the shape is conducive to, the lower salt content probably won't matter much. But on their own, they were less tasty than Fritos.

From the package: The back of the bag has a recipe for Cactus Joe's Mexican Hat Dip.

This snack was discovered by Jeremy at Save-A-Lot Food Stores. Review published April 2011.