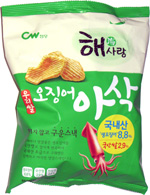 Taste test: These wheat-based snacks were shaped kind of like squid, though curved into cup-like shapes. Unlike the ones pictured on the package, the actual chips didn't have ripples.

We crunched in to find a strong crunch and fairly crisp feel, with a high density. There was a reasonably mild fishy squid taste. If you really like squid, these might not be squiddy enough for you. If you don't like squid at all, there's probably no reason to eat these, but if it's a choice between these and another squid snack, these weren't nearly as bad as most of the others.