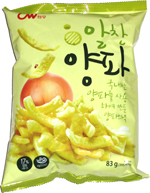 Taste test: Unlike most onion ring snacks, which tend to be mostly fully intact rings with some broken ones, this appear to promise (based on the picture on the bag) and deliver entirely broken ones. Although most of the pieces had arc-type shapes, some were more straight or wiggly, so they didn't really seem that much like broken rings after all.

We crunched in to find a good crispness and fairly solid crunch, though some pieces were softer than others. The onion flavor was fairly mild. Most of the onion rings we've tried were corn-based, but these were wheat-based, and we think having corn as the primary ingredient may produce a somewhat better result. But then again, we're talking about onion snacks, right? How about someone try to create an onion-based onion snack?