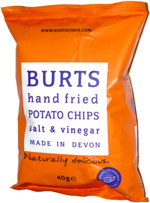 Taste test: This small bag contained quite a few potato chips, nearly all of them unbroken.

The chips were generally medium-sized, with a wiggly appearance similar to many kettle-cooked chips. Upon biting in, I found that they were cut fairly thick and had good crispness and quite a nice crunch. There was quite a lot of flavor seasoning visible on the chips, and it brought with it an excellent vinegar flavor, quite tasty but also mild as vinegar chips go. The vinegar mixed well with the potato taste for a top-notch chip, definitely one of the best salt and vinegar chips we've tried.

From the package: “Made in Devon” ... “Naturally delicious.” ... “Grown in field Hook” ... “Fried by Sony” ... “A big hello from all the fryers at Burts! In 1997 all we could fine were tasteless, junk filled crisps. We knew we could do better. After a lot of searching we found an old fryer (a machine not a person) and put in a tiny factory down here in deepest Devon. Then we started to work out how to make fantastic chips using only the finest and freshest ingredients. It look us ages to cook the perfect chip with quite a few burnt ones (and fingers) along the way. Eventually we worked out a simple and delicious recipe.”

This snack was discovered by Cat Carney in London. Review published .