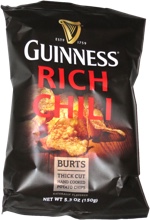 Taste test: These chips had a similar brown-and-yellow appearance to the non-Chili version of the Guinness chips, with a thick cut, wiggly shapes and bubbles embedded inside.

I crunched in to find a taste that was remarkably similar to the original kind, very tasty, but not really anything in terms of a jalapeño pepper taste (and again not like a beer at all, for those hoping for that). There was a mild jalapeño heat in the aftertaste, quite tasty, but emphasis on a mild part, as this was not much of a hot chip. Very good, though.