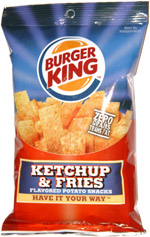 Taste test: The snacks in this bag of Burger King-branded potato crisps had a shape all their own, as they weren't shaped like fries, potato chips, potato sticks or anything else we've eaten.

Each piece was about the same thickness as your typical potato chip, and the width was about twice that of a Burger King fry. Lengths varied. They had an uneven but still generous coating of bright red seasoning, with a similar look to the seasoning on Herr's Heinz Ketchup Chips. They tasted quite good, with a nice tangy ketchup flavor. Our snackers liked the taste a lot, and even some who expected not to like them (having not eaten ketchup chips before) generally liked them.

From the package: “What's better than ketchup and fried? How about a mystical merge of ketchup, fries and snack chips? You heard us. Only from BK™. A flavor that pairs the yin flavor of your favorite BK™ side with the yank crunch of chip. Keep on chippin' on.”

This snack was discovered by Jeremy at Rite Aid. Review published January 2008.