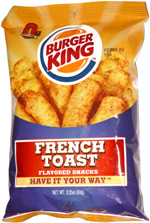 Taste test: These corn meal-based snacks looked sort of like flattened cheese puffs, except with a color more like French toast.

The surface appeared to have cinnamon sugar on it. When I bit in, I found that they were slightly denser than your average cheese puffs and tasted quite a bit like French toast. I could taste cinnamon, syrup and butter, and it was a pretty good mix. The texture was nothing like French toast, but then again, this was just a bag of snacks, not actual French toast. It was hard to stop eating these, and there were lots of them in the smallish bag.

From the package: “Have it your way™” ... “Can't get enough syrup and cinnamon french toast taste? BK® crispy French Toast snacks are available whenever you want. These small puffed snacks are smothered with the taste you love and deep crunch. You'll be craving more!.”

This snack was discovered by Keith. Review published September 2009.