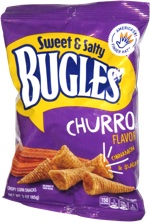 Taste test: These Bugles looked much like the other flavors in terms of shape and color, but some of the pieces appeared to have some dark areas of cinnamon within the ridges encircling each piece.

I crunched in to find a strong crunch and some cinnamon sugar added to the standard Bugles taste, but frankly not so much of it, so they tasted more like Bugles than they did churros. It was easy to tell visually which pieces had more of the sweet stuff than others, but even the ones with more of it fell far short of the sweetness level I'd expect of a churro. (Many real churros are quite excessively caked in cinnamon sugar, and I would accept a far, far lower level than those to still be considered churro-like, but these went a whole order of magnitude below even that.)

From the package: “America's #1 Finger Hat™” ... “Since their origin in Spain centuries ago, churros have evolved into the familiar cinnamon-sugar treats enjoy across cultures around the world. Now we've combined this cinnamon-sugar flavor with the unmistakable shape and crunch of Bugles™ for a one-of-a-kind snack.” ... “Partially Produced with Genetic Engineering”

This snack was discovered by Jeremy at 7-Eleven. Review published June 2018.