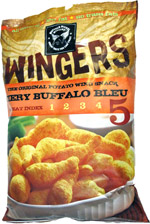 Taste test: These potato-based snacks looked similar to the decent Caribbean Zing version of Wingers from Buffalo Nickel Food, with the same hollow drumette shape, but with a different flavoring.

This one was supposed to be 5 out of 5 on the heat scale (as Buffalo Nickel makes one variety for each score on the scale). Our tasters were not the least bit impressed: Nobody liked the flavor. Some tasters thought there was a mild heat in there, while others didn't notice any at all. Nobody thought they tasted like Buffalo wings, nor blue cheese, nor anything good. Some of our snackers though the tasters was tolerable, but most were downright appalled by the taste. One couldn't even finish eating a single Winger, as he took one bite and tossed the remainder of his piece into the trash. The consensus was: Yuk!

Smell test: Kind of an odd spicy smell, like a mix between Buffalo sauce and taco sauce. Not particularly good.

From the package: “The original potato wing snack™” ... “This the real deal. Fiery Buffalo Bleu rates a 5 on the Heat Index for a reason — but don't worry there's a hint of bleu cheese dip cooked right into that authentic Buffalo Wing flavor. It's cool. In fact, it's just cool enough to let you plow through a nice bowlful.” ... “These delicious Buffalo Nickel Wingers™ trample the myth that natural snacks can't have unreal flavor — and they do it in style.”

This snack was discovered by The Bonnie at Christmas Tree Shops. Review published April 2010.