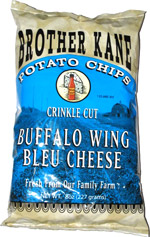 Taste test: These potato chips were cut fairly thick, with medium-width ripples and an uneven coating of light orange seasoning.

There were lots of chips in the bag, but many were broken, and the chips had settled to the bottom. We've had quite a few Buffalo wing-flavored chips, and many of them really tasted just like Buffalo wing sauce and/or blue cheese, but these kind of missed the mark in that regard. People really liked to eat them anyway. Several tasters said they were more like cheddar & sour cream chips, but with a little extra kick of heat. People kept returning to the bag for additional handfuls while enjoying these with some beer, and the large bag ended up empty before too long.

Smell test: Cheesy, but not particularly like blue cheese or wings sauce.

From the package: “I'm an old fashioned guy with old fashioned ideas. For instance, I believe that people should take painstaking care in the manufacturing of their products in order to ensure the total satisfaction of those who buy them. That is why we use only the best of our home grown potatoes, slice them by hand and then process them in small batches to maximize the flavor of every single chip. This is a small example of the non compromising approach we take to delivering quality.”