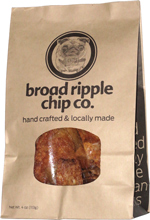 Taste test: When these chips arrived in the mail, we were surprised to see through the window on the bag that the chips didn't have ripples. We had assumed that "Broad Ripple" meant that the were going to be ripple chips, and more specifically wide-rippled ones, but they were not rippled at all! For people in Indianapolis, where these are sold, it probably would have been obvious that they were named for a place called Broad Ripple Village in Indianapolis, but we'd never heard of it until we read the back of the bag, so our first thoughts went right to chip types!

The chips had colors on the surfaces starting at golden yellow and going darker from there, through many levels of browning, with dark parts constituting the majority of the surfaces. The mix of colors looked quite nice. The chips came in many shapes and sizes, and some of the larger ones were fairly big, with long and narrow shapes.

We crunched in to find that some chips had a slightly hard crunch, while others were crisper and more brittle. The brittle ones in particular had a very fresh feel. The potato flavor was rich and tasty, with a some of the dry feel that most brands of russet chips have, but there was a bit of a moister sensation in the mouth than those others.

The ingredients said that these were not just plain potato chips with salt, as they also had some spices and sugar on them. We couldn't taste much of those spices (though they may have subconsciously enhanced the potato flavor for us) but there were a few chips where some of that sugar was noticeable.

These chips were a huge hit when we shared them with a group of snackers enjoying some beer after returning from a run in the cold — very nice texture, excellent taste!

From the package: “Our all-natural, handmade artisan chips are made from Russet potatoes, which result in slightly darker chips that are richer in flavor. These lightly-seasoned chips are super crunchy and have more true potato flavor than factory-made chips, which use nland white potatoes, and maybe months old when you purchase them. Every set of the process is done by hand: selection, slicing, seasoning and packaging.” ... “Ingredients: Russet Potatoes, Canola Oil, Garlic, Onion, Spices, Sugar, Salt.”