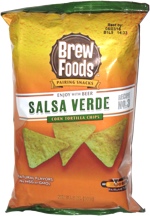 Taste test: These chips, along with some other varieties from the same company, were billed as having flavors developed specifically to be paired with particular kinds of beer.

The three chips pictured on the front of the bag looked slightly greenish, but the chips inside did not; it was a typical yellow tortilla chips color (though with lots of seasoning in various colors, including green). The chips had isosceles triangle shapes, with lots of bubbles in the rough surfaces, and they were even larger than the standard-size Doritos.

I crunched in to find that they were slightly less crisp than Doritos, but still had a good texture, and they were really heavily loaded with flavor. The salsa verde taste was both zesty and hot, very tasty! It left behind a lingering hot aftertaste too.

Brew Foods recommended that Salsa Verde go with pale ales and pilsners, so I shared the bag with some folks enjoying beers after going for a run. Two people who were drinking Harpoon IPA liked the taste of the chips a lot and found that they went very well with the beer. On the flip side, another snacker with a Guinness in his hand liked the chips on their own but found that they did not go very well with his non-recommended beer.

From the package: “Best paired with hoppy, fruity Pale Ales or light, crisp Pilsners” ... “Craft Chips for Craft Beer™” ... “Our unique pairing system is part art, part science.” ... “we carefully select savory and sweet ingredients to complement the hot and malt flavors in beer. The recipes are adjusted until the flavors match perfectly.”