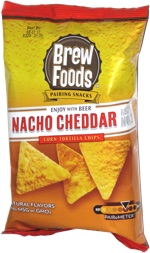 Taste test: This third member of the Brew Foods tortilla chips line (alongside original members Chipotle BBQ and Salsa Verde ) had the same shapes and similar surface texture to the corresponding flavor of Doritos, but the color was all mustardy yellow, with none of the bright orange cheese that you see in a Doritos.

We crunched in to find a softer crunch than Doritos, not nearly as crisp, with a good cheese flavor, again less intense than Doritos, but it was tasty and mixed well with the corn. They chose "Nacho Cheddar" rather than the more conventional "Nacho Cheese" to describe this chip, and it was a good flavor, but I couldn't taste much distinction between a cheddar Nacho and a non-cheddar Nacho.

Smell test: Good mix of corn and cheese, not quite as cheesy as Nacho Cheese Doritos.

This snack was contributed to Taquitos.net by the manufacturer. Review published April 2017.