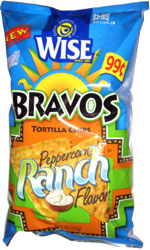 Taste test: These triangular tortilla chips had a decent ranch taste at first, but a weaker one than Cool Ranch Doritos, and as time went on, the ranch flavor kind of faded away, so what was left was a much plainer tortilla chip. The big thing here was supposed to be an extra peppercorn taste, but there was maybe just the slightest sub-hint of pepper in the first bite, barely enough to matter, and then just the same weak taste after that. Cool Ranch Doritos have much more flavor.

If the folks at Bravos are trying to play catch-up with the ever-popular Cool Ranch Doritos, they're not going to have much success with a flavor like this. These were not horribly bad chips or anything, but they were just really weak when weighed against their entrenched competitors.

From the package: “There's no one arguing that everyone loves ranch. But if you thought ranch chips couldn't get any better – you were wrong. By adding a peppercorn twist to this classic, these creamy Peppercorn Ranch tortilla chips will surely turn some heads.”