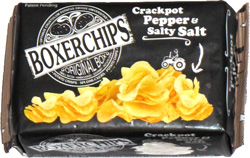 Taste test: This small box (enclosed in a wrapper) was packed to the top with small potato chips.

The chips had a light yellow color, with wiggly and folded shapes, and there was lots of skin around the edges, including some dark spot along the skin. As with the other flavors of Boxerchips, small and broken chips dominated the box. A close look at the chips revealed some tiny bits of black pepper, but not a lot of them. I grabbed a few chips and crunched in to find a very, very strong crunch that went a along with a very weak black pepper flavor. If it hadn't said on the wrapper than there was pepper, I might not have noticed it at all. The aftertaste was really nice, as there was some black pepper (still not a lot) and a rich potato aftertaste that was quite tasty. It seemed like they added enough black pepper to help bring out the potato taste, but not enough to really add much of a black pepper flavor.

From the package: “The Original Box of Crisps”

This snack was contributed to Taquitos.net by the manufacturer. Review published November 2012.