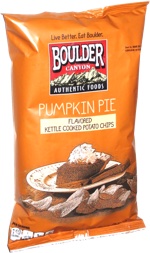 Taste test: These potato chips, introduced along with a Turkey & Gravy flavor, had generally a golden yellow color, with the same wiggly shapes, bubbles and folded-over chips typical of kettle-cooked chips. There was no visible seasoning on the surfaces.

We crunched in to find a sweet taste that was a whole lot like pumpkin pie on the first bite. It wasn't the strongest flavor, so the pumpkin pie taste didn't last long, but after that, there was still a very good potato taste. Our snackers were mixed in their reactions, as some just found the idea of sugar on a potato chip to be weird, but most agreed that the taste was a lot like pumpkin pie. A stronger pumpkin pie flavor would have helped. These were OK, but the turkey ones were far better.

Smell test: Not that strong, but it really did smell like pumpkin pie.

From the package: The pumpkin has long been known as the symbol of harvest time absolute must-have in the Thanksgiving Feast! Our pumpkin pie flavored kettle cooked potato chips feature a delicious, perfectly balanced blend of pumpkin spices, nutmeg, and cinnamon… you'll definitely want to leave room for this one!

This snack was discovered by Daisy Chow at Shaw's at Boston University. Review published .