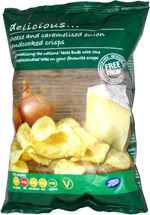 Taste test: This small bag contained surprisingly large chips, especially the first chip at the top, which was huge.

The chips were cut thick and had skin visible all around their edges. Some chips were flat (including that huge one) while other were folded over or wiggly. They were all very crunchy, with a solid, hard crunch. The cheese and onion flavor was sweet, probably more oniony than cheesy, a mild flavor but still quite tasty. This bag of chips was a great value, because I got it with a sandwich and beverage as part of a "meal deal" at Boots.

From the package: “we're tantilising the nation's taste buds with this rather sophisticated take on your favorite crisps” ... “we don't mess with your food, that's why we say no artificial colours and flavours, hydrogenated fats and flavour enhancers ”

This snack was discovered by Jeremy in London. Review published .