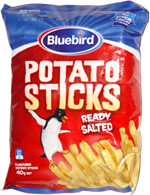 The sticks varied in color from pale yellow to somewhat browned. They had a good crispness and lots of salt on them, but they were a bit on the greasy side. These tasted good, with a lot of potato flavor. I ate about half the bag in combination with a peanut butter and jelly sandwich.

From the package: “Stay a cut above the pack with Bluebird Potato Sticks; the shape of things to come.” ... “Made on a production line that also produces products containing milk, soy and gluten.” ... “Made in New Zealand from local and imported ingredients.”

This snack was discovered by Amitai in New Zealand. Review published April 2009.