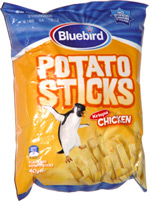 Taste test: These looked generally the same as most of the potato sticks that we've eaten, but they did have a lot of seasoning powder visible on them.

The powder looked pretty much like salt, though I'm not sure whether that's what it was. Most of the sticks were fairly short, and they did taste like chicken. It was a pretty good taste at first, though it got a bit intense after I ate a dozen or so sticks, so I reached for a beverage at that point. We've had some chicken-flavored chips that were better than these and some that weren't as good, so these fell somewhere in the middle.

Smell test: Smells like chicken with some mild spices.

From the package: “Stay a cut above the pack with Bluebird Potato Sticks; the shape of things to come.” ... “Made on a production line that also produces products containing milk, soy and gluten.” ... “Made in New Zealand from local and imported ingredients.”

This snack was discovered by Amitai in New Zealand. Review published .