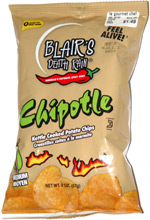 Taste test: These potato chips were very wiggly in shape, with many of the chips fully folded over and most of them fairly small.

This snack was discovered by Beth N. Review published April 2010.