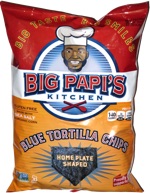 Taste test: Having recently completed his baseball career, it seems that David Ortiz is expanding his second career in making tortilla chips. Last year, when Papi was still playing for the Red Sox, we ate and reviewed his original version, and now, just a month after his retirement, we discovered that he's also selling this blue corn version.

Like the originals, these large chips were cut into shapes just like home plate, with some minor wiggles and bumps on the surfaces, but generally they were quite faithful to the intended shape. They had a dark gray color, with maybe a touch of blue, like most blue corn chips. Impressively, almost all of the chips were unbroken. I crunched in to find that they had a light crunch and a pretty good crispness, with a mild corn taste. I ate them with some thick 5-layer dip, and the chips were plenty strong to handle lots of dip. All in all, pretty good chips.

From the package: “Home plate shaped” ... “Gluten free” ... “Made with sea salt & organic corn” ... “Growing up in the Dominican Republic, David Ortiz was raised on the fresh, flavorful tastes of Latin cuisine. In his home of Boston, David is still remains loyal to these Latin roots and the memories of his native Dominican Republic. With Big Papi's kitchen, David can share those great tasting memories while also supporting the David Ortiz Children's Fund, raising funds that provide access to children in the Dominican Republic and the Northeastern United States to the critical pediatric care they need to live full, productive lives.”

This snack was discovered by Jeremy at Target. Review published November 2016.