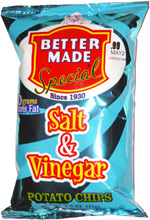 Taste test: These yellow potato chips had some bits of skin on their edges, as well as some dark spots, and the vinegar powder was visible on the surfaces. Most of the chips were large and unbroken.

I crunched in to find that the chips were cut fairly thick, and they were crisp and quite tasty, with a nice mix of fresh potato taste and fairly strong vinegar zing. Definitely a vinegar chip worth trying.

From the package: “Better Made, was founded in Detroit as Cross & Peters Company, Inc. on August 1, 1930. In 1934, there were over twenty potato chip companies in Detroit, today only Better Made remains. We are proud to have survived and prospered through the years as a Union plant drawing many of our employees from the surrounding urban area. Since our existence, we have processed Michigan potatoes for up to 10 months of the year (nature won't allow us to use them all year long) and the best potatoes from Florida, North Carolina, Indiana and Missouri for the remainder of the year. For your eating enjoyment, our potato chips are cooked in the finest oils, contain 0 grams of Trans Fat and are flavored with the highest quality seasonings.”