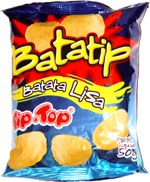 Taste test: These potato chips had a pale yellow color and looked fairly thick, with some salt visible on most of the chips.

When I crunched in, the taste was much different taste than any other potato chips I've tried (and I've tried a lot of potato chips). The flavor seemed weaker at first, so I thought that there wasn't any salt on them, but it sure looked like there was salt. I could taste some potato, but it just tasted different. There was a somewhat greasy feeling in my mouth after eating two chips, markedly different than I recall from any other non-lard-based potato chips. I translated the Portuguese ingredients into English and found that these used "hydrogenated vegetable fat" as opposed to oil, so that might explain the different taste. I didn't find the taste to be awful or offensive, but it definitely was not what I expected.

Smell test: Not much, but slightly sweet, almost like plantain chips.