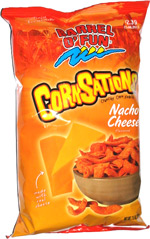 Taste test: These hollow snacks were shaped kind of like penne pasta, except sort of flattened and generally curved.

They looked kind of like Fritos until I noticed the hollow aspect. There was kind of a yellow-orange color, with the underlying corn chip being yellow and the seasoning orange. Though they didn't look at all like Bugles, they turned out to be quite similar in texture and taste. They had the light, crispy feel of Bugles, not the crunchier, denser feel of Fritos. The level of cheese varied from one piece to the next, but generally there was quite a bit of tangy cheese taste to go along with the very tasty, salty corn. Some snackers though there was too much cheese, but most of the people who tried these enjoyed eating them a lot.

From the package: “Folks 'round these parts go crazy for corn. That's why we cooked yp CornSations. The crispy, crunchy, straight from the field tastin' corn snack. Shucks just about every that tries these dang thangs gits 'em cornfused with the real thang. With a good 'ol crunchy bite and bushels of big corn flavor, its no wonder folks are goin' hog wild fer Barrel o' Run CornSations. Yee-Ha!”