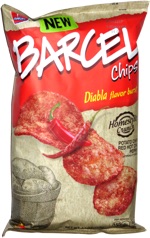 Taste test: These potato chips from Mexico had wiggly shapes and a generous amount of deep red seasoning on their surfaces, so they looked liked they were going to be hot.

I crunched in to find a nice crispness and good crunch. There was indeed a flavor burst as the bag said, but the heat didn't rise to the expected level. There was a good amount of heat, just not quite the overwhelming level that I expected from the red color and "Diabla" name, and the mix of peppers and spices was excellent. I shared these with a number of snackers enjoying some beers after going for a run, and people all liked the flavor but had different interpretations of it. One was convinced it was like Buffalo sauce, while another found a similarity to spicy ketchup. A great one from Barcel.

This snack was discovered by Jeremy at Wal-Mart. Review published January 2017.