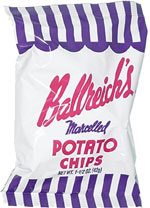 Taste test: Despite the bag saying that it was a 'thin wavy chip,' we actually thought it was thicker than some other potato chips.

There's a good potato flavor to the chips, and they were crunchy, with not a lot of salt. There was an oily taste after you chew into the chips after a few bites, and it reminded me of some Pennsylvania-based chips like Gibbles. Not bad overall.

From the package: “Marcelled -- a Thin Wavy Chip 'Bursting with Potato Taste!'”

This snack was contributed to Taquitos.net by the manufacturer. Review published July 2003.