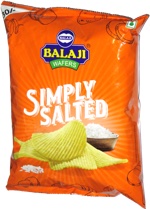 Taste test: These potato chips from India had narrow ripples and fairly flat shapes, with a light yellow color generally, plus some areas of browning, including many chips that had kind a ring of brown recessed without the edges. Most of the chips also had some areas of skin along the edges.

Having reviewed several strong flavors of potato chips from the same company, I expected these to be just plain potato chips, and the marketing copy on the bag reinforced that belief. However, when we crunched in, there seemed to be just the slightest hint of some sort of Indian spices. Not a lot at all, and mild enough that I though maybe I was imagining things, but I'm pretty sure there was something there. Still, pretty good chips with a soft crunch and good potato flavor, with maybe just a bit of something extra.

Smell test: Nice potato smell, but I'd swear I cold notice a hint of Indian spices.

From the package: “Made of salt and nothing more. It can't get simpler. In fact, this wafer is the symbol of simplicity,. We all have a lot to learn from it. But no, we want to eat it. So go ahead, eat it, without making this more difficult.”