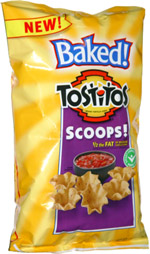 Taste test: These tortilla chips were shaped kind of like hexagonal tortilla bowls, pinched together at six points into a tiny edible bowl for dipping salsa.

The taste was very similar to standard tortilla chips, but these Scoops were definitely on the brittle side, as most of the ones in the bag were at least a little bit broken, and in many cases, severely broken into many pieces, which negated any benefit of having the scoop shape. The small number of unbroken ones were pretty good for dipping, though they were sufficiently small that you couldn't get a whole lot of salsa into the chip.

Smell test: Mostly the regular tortilla chips smell, but all somthing a bit odd mixed in.

From the package: “When choosing a tortilla chip, Baked! Tostitos® Scoops! are a smart choice because they are half the fat compared to regular Tostitos® tortilla chips and a once ounce serving has 0 grams of trans fat and 0.5 gram of saturated fat per serving.”

This snack was contributed to Taquitos.net by the manufacturer. Review published May 2007.