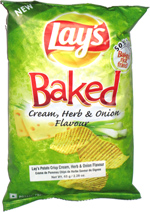 Taste test: These rippled potato crisps from India had irregular but loosely hexagonal shapes, with a pale yellow color overall but lots of bits of green stuff embedded inside. Yes, despite being Lay's and not Ruffles, did not have the flat surfaces of the American flavors of Baked Lay's.

We crunched in to find a texture a lot like Baked Ruffles, with a good crispness and brittle crunch. The mix of potato, sour cream and herbs was tasty, as the sour cream was intense and the herbs fresh-tasting and strong. Very tasty.

From the package: “Potato Crisps” ... “At Lay's we are always open to new tasty experiences, so that's why we put a lot of extra effort into creating a snack with a difference — Lay's Baked. First up — they taste great. That's because we bake them for crispy crunchiness and exceptional taste. And because they are baked, they contain 50% less fat.” ... “From the makers of the world's No. 1 potato chip”