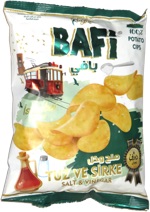 Taste test: I bought this bag under the belief that it was going to contain potato chips, with the words "100% Potato Cips" sealing the deal, but when I opened it, it immediately became clear that it was actually potato crisps, cut into round pieces and then curled up into various shapes during the cooking process. The bag's Ingredients confirmed that it was made from potato powder, not sliced potatoes.

The surfaces were pale beige with a smattering of brownish bits. They looked quite different from other potato crisps like Munchos. I crunched in to find that they felt different from Munchos too, as the texture was close to what many wheat-based snacks feel like. However, I could still taste the potato, plus a nice mild zing of vinegar, a nice combination.